Canoeing the Brule River in Winter Through Ice and Snow


A boat trip down the Brule is an experience never to be forgotten. One may start at Stone’s Landing, first going upstream a short distance to see the Blue Spring, then down through Rainbow Bend, Cedar Island, Wild Cat Rapids, Ashland Lake, Winneboujou, Bayfield Bridge, Club House Falls and dozens of other scenic spots. One gets a thrill out of shooting the rapids and dreams of the sturdy voyagers who traveled this route back in the seventeenth century.
Leigh P Jerrard, the Brule River of Wisconsin, 1956.[1]

This photo is of the cabin at Swiftwater Farm where desperate frozen strangers found refuge on that cold snowy winter’s night back in the mid-1950s.  The woman in the photo, Louise Pearson Luthens, was one of the little girls that opened the door to life to the freezing youth. 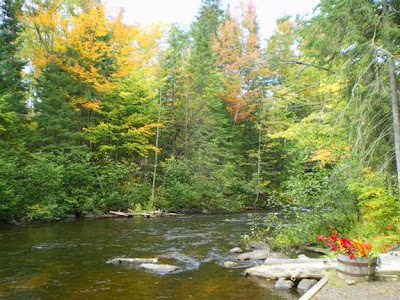 Swiftwater Farm on the famous Brule River in September 2008, the place where the winter canoe adventure ended.

Carl Pearson was a guide on the Brule River. He knew the river well.  He marveled that we had all survived our folly. 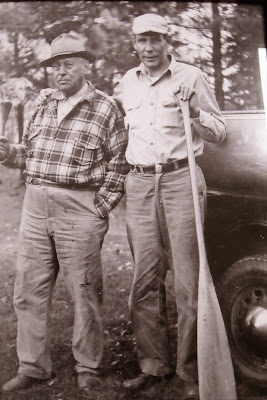 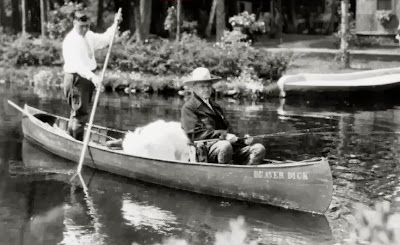 My wife Jane Pearson Grimsrud, is a published author with three Brule area books to her credit. Her family roots are tied to the Brule River dating to her pioneering grandparents who relied on the river’s water when they first settled along the Brule in Cloverland.
The Brule River has been a large part of Jane’s life from childhood.
The following books are available in paperback and digital editions worldwide: Lookingfor a New Frontier, the Story of the Edwin Pearson Family, 2010, and Brule River Forest and Lake Superior: Cloverland Anecdotes, 2013.

[1] The Brule River of Wisconsin was revised in 2011 by Richard Jerrard. The first section contains the original work of Leigh P. Jerrard from 1956.  The second and third sections are new material and maps.


[3] The Long Nebagamon Rapids also known to us as Big Joe Rapids.
Posted by JJ Yucatan at 3:02 PM No comments:

Cloverland, Wisconsin - History was all around me


I grew up in Cloverland, Wisconsin. I looked at it as the place settled by my grandparents and their friends in the 1920s, but it was more than that. History was all around me. 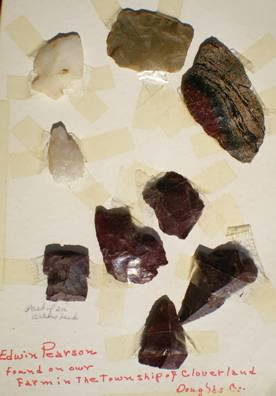 When we walked behind my father’s stone-boat clearing the fields of sticks and stones, we found arrowheads, logging saws, chains, railroad spikes, tree roots…all left by those who came before us.

The arrowheads and knives were found on our farm in Cloverland, Wisconsin.  Cloverland is located in the northeast corner of Douglas County.
Cloverland, Wisconsin, is the site of many centuries of human history. Whenever we visit the Brule River, Lake Superior’s shore, hike in the Brule River State Forest, or drive down Highway 13 from Superior, Wisconsin, to Port Wing or Bayfield, we share the space once occupied by the ancient Indians, Sioux, and Ojibwe, fur traders, lumbermen, speculators, miners, homesteaders, and immigrant farmers of the cut-over land.

The Brule River[i] that flows north through Cloverland was once an important water route connecting Lake Superior via a portage to Upper Lake St. Croix,  the St. Croix River, and then south down the  Mississippi River to the Gulf of Mexico.
[i] The Brule River is also known as the Bois Brule River.
Posted by JJ Yucatan at 2:52 PM No comments: